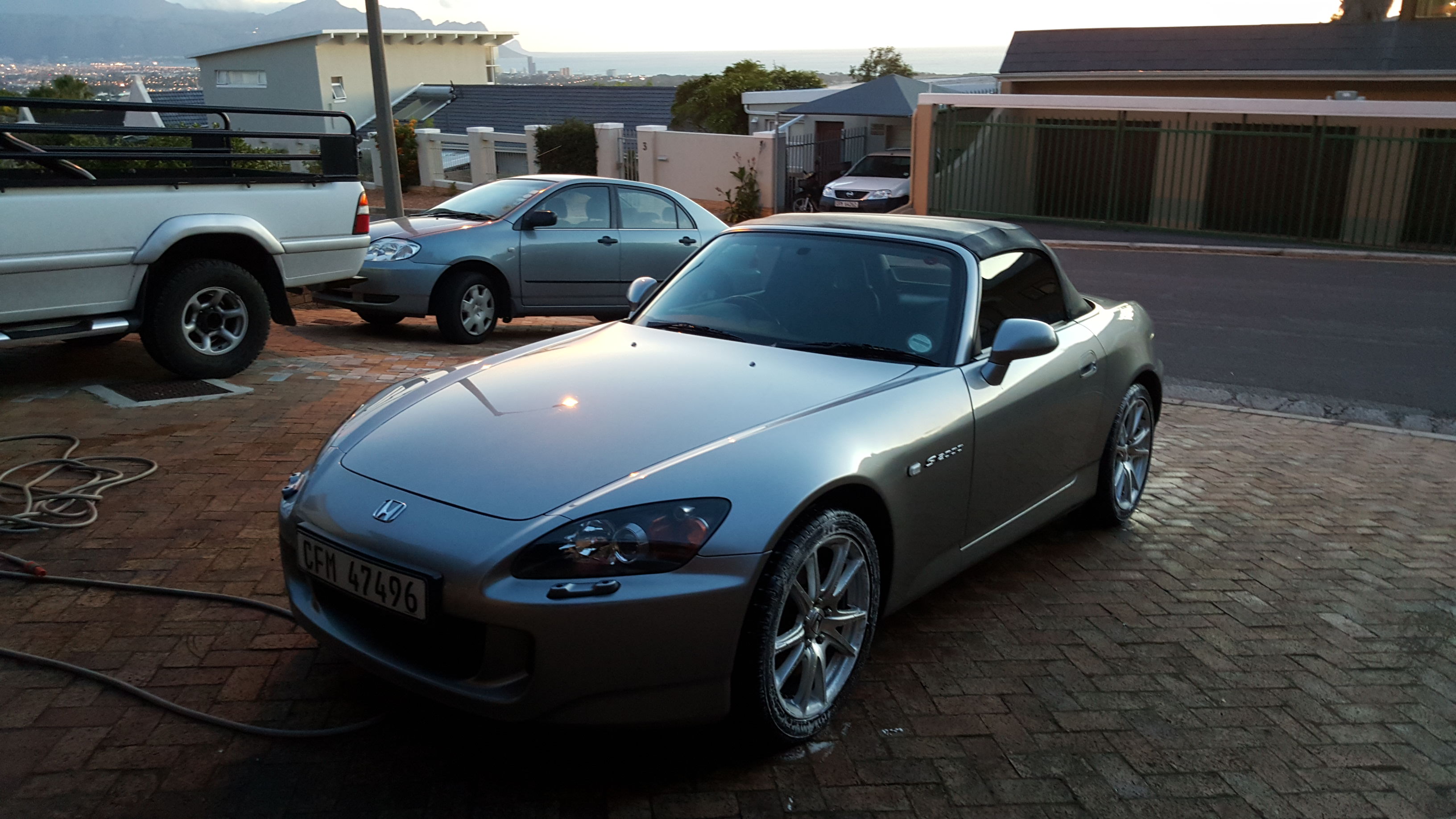 Edith Piaf sang it beautifully “No, nothing of nothing, No, I don’t regret anything!” I’m pretty sure she wasn’t singing about a car at the time, but for me it applies all the same. Being the ‘regular ray of sunshine’ that I am, I have been known to swear and cower in physical pain every time I see a Honda S2000 drive by. Why? Because I’ve had 2, and I absolutely loved them! But, do I regret selling them? Nope.

My love affair with the S2000 started when I was still living in the UK. It was around 1999 when my brother, my mother and my dad were all driving Hondas ranging from Civics to CR-V’s. One of their cars brought us to the Honda dealership, I can’t even remember exactly why, but what I do remember is seeing this sleek little 2-seater roadster on the dealership floor. The long silver bonnet and short rear gave it that classic roadster profile that no man can resist. I stepped into the car and just ran the shifter through the gate from one gear to the next – and that was it. I was sold! I knew I had to have one – one day… The feel of that bolt action gear lever and the fact that I knew the engine can spin to an absolutely mental 9000rpm, made my little head spin!

It would be several years before I had my chance though. I think it was around 2007/2008, I was driving a white Golf 5 GTI at the time. I spotted a black 2004 Honda S2000 with only 17k km on the clock and a full service history for a very reasonable price – and the rest is history.

I’ve already mentioned the side profile with the long bonnet, but it’s worth noting how timeless the S2000’s design seems to be! Even today, if you see one in the street, you wouldn’t know that it was such an old design! Very few modern cars can pull that trick off as well as the S2000 does. The earlier cars came with 16″ wheels that looked a little lost in the arches, but from 2004 with the introduction of the AP2 model, the cars had 17″ wheels, with a much wider wheel at the back than at the front. This made the S2000 look really quite aggressive and sporty from the back. It’s a great looking sportscar!

The S2000 is one of those cars you don’t get into, you put it on like your favourite pair of jeans. It’s a pretty snug and compact cabin, but comfortable enough for all but the tallest of drivers. The seats are fantastic at holding you in place, and look great too. The dash is almost bare, very minimalist, with all the controls for the sound system and ventilation huddled around the steering wheel so that the driver can operate pretty much everything without ever taking his hands completely off the wheel. The instrumentation looks like a 1980’s formula 1 car with the digital rev counter stretching out over the other digital indicators. Everything in this cabin points to the driver – this is a driver’s car! The transmission tunnel is high in the center of the car and the short little gear shifter sticks out in just the right position to quickly move your hands from steering wheel, to gear lever and back.

In terms of practicality however, it does leave a few things to be desired. Storage space is minimal, and other than air conditioning and electric windows, there aren’t exactly any ‘toys’ you can fill up the extras brochure with. Some might say that’s a bad thing, to me it just reinforces the purpose of this car. The boot is at least bigger than you might expect and you can get quite a lot of gear in the back, BUT you will have to be clever in how you do it, because with roof motors, fuel tank and spare wheels all fighting for space in the back, the boot ends up being a very awkward shape.

The one thing you will always remember about driving an S2000 is that engine. A naturally aspirated 2.0L motor pumping out 177kW at 8800rpm, was unheard of when this car was first released. Every road test you will ever read will also tell you that the S2000’s biggest fault is its lack of torque. 200NM isn’t exactly ‘bad’ for a 2L, but the S2000’s problem was that below about 6000rpm, you had almost non of that 200NM available. Cruise around in 6th gear and put your foot down, pretty much nothing happens. Even at 120kph, you would have to drop down the 3rd gear to really get the S2000 to shift. To me though, this was just another perfect excuse to make more use of that incredible gearbox. I could probably write several posts JUST on the feel of that S2000’s gearbox.

It slots from one gear to the next with a mechanical feel that puts a massive grin on my face every single time. The short, accurate action is addictive, and you often find yourself just changing gears for the hell of it! All these idiots with their flappy paddle gearboxes in their turbo hot hatches, will never know the pleasures they are missing out on in simply changing gears on a gearbox like this, or the incredible throttle response you get from a well sorted naturally aspirated motor.

With a limited slip diff, perfect weight distribution and a pretty quick steering rack, the S2000 is such a giggle to throw around some corners. You have to show it some respect, because the back end can break away from you, and when it does, it does so pretty damn quickly. Personally, I’ve spun my S2000’s a couple of times! In the wet, the car actually gets quite unsettled as the combination of super wide rear tyres and light weight causes the back end to float over even the smallest of puddles.

Overall, it is engaging and fun to drive. Driving fast on twisty roads you have to concentrate to keep the car pointing in the right direction, and keep track of what gear you’re in to make sure you don’t let the revs drop below 6200, so you can stay in the V-tec zone. In town it’s as easy and as comfortable to drive as a Civic, but once the revs cross over that magical 6200 mark, you can hear the engine note change and physically feel the shove in your back as the Civic engine, turns into a racing engine. The little LED bars race across the rev counter up to 9000rpm, another gear change and it all starts over again! The gear ratios are picked perfectly so that you change at 9000rpm and it drops back to around 6500, still in V-tec range.

Nothing short of magic.

So why no regrets?

Selling my first S2000 allowed me to experience other cars that I never would have driven had I not sold it. A few years later I bought my second S2000, a silver 2005 model – if anything it was even better than my first one. Selling that car allowed me to buy my Unicorn Jag, which I would never have been able to do had it not been for my S2000. These cars have become cult collector’s items and I have made money on both my cars after about 2-3 years of ownership. I don’t regret selling my S2000’s for one second – I will always want another one, but with budgets and garage space to consider, I can only own so many cars at any given time. Of far greater concern to me is the fact that there doesn’t seem to be any other car on the market that could be considered a replacement. Nothing that embodies performance and driving fun the way that the S2000 did. Car manufacturers have stopped catering to petrol heads! The only fun affordable sportscar out there these days is the Toyota 86, and maybe the Mazda MX5, which is very overpriced in my opinion; and neither of these cars could match the S2000 for performance.

I guess it’s true what they say, they don’t make them like the used to – which is sad, because without any doubt in my mind, the Honda S2000 is the best car I have ever owned…

Have you ever regretted selling a car? What was the best car you’ve ever owned? Get chatting in the comments, and don’t forget to subscribe on the right!