Of Corsa shouldda bought a Bantam 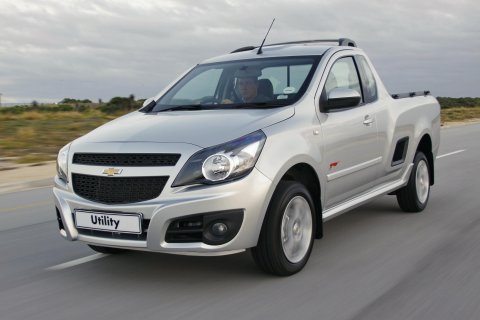 I was not planning on writing anything today – it’s Friday morning, I have just arrived at work having driven one of our fleet vehicles and it has left such an impression on me, that I felt the need to write about it.

The vehicle in question is a Chevrolet (Opel) Ute (corsa bakkie) 1.4i, and demonstrates exactly why I still believe that the oft-heard statement of “there are no bad cars any more” is completely false. Because without trying to use vocabulary that would render this blog X-rated, this one is a stinker.

The look of it.

Based on the corsa bakkie, the rear end and side profile has changed very little over the years and is actually quite attractive for a 1/2 ton bakkie. The front, has however, received the full droopy faced, smacked with the ugly stick, chev treatment. It is aweful! The grill smiles at you like a simpleton and the headlights look like they were attached and then stretched over the corners, without too much thought of what the result would look like. Panel gaps are also an issue, since the gaps at the front appear to be bigger than the gaps on the sides and back. Almost like Open built the back end properly and Chev just bungled together the front end.

The interior is a similarly discordant mess. The dial cluster looks like a cheap imitation of a Star-Trooper helmet’s head-up-display. The air controls are needlessly big with a big display above the dials showing you what you just selected on the dials anyways. Sort of like they saw the competition were putting big displays in their cars and they didn’t really have anything to display – it serves no purpose, since all the dials are labeled anyways and adjustments are usually made without looking at the display. The pointless display and big dials below, take up so much space on the center of the dash, the single DIN radio has to be mounted really low down on the console. This does not make it particularly easy to reach or use – especially when you consider that the gaudy gear lever spends much of it’s time right in front of it.

Yes everything is hard, black plastic, but in this sector of the market that is sort of par for the course and given the ‘light-commercial’ space this thing will operate in, the black plastic is at least practical. To its credit, after 144’000km of hard graft, our little bakkie still has no interior rattles or squeaks, so it is at least put together quite well.

By far my biggest complaints about the interior is not the looks or the materials, but the ergonomics and tactile feedback. Despite spending a really long time trying, I found it completely impossible to get into a good, comfortable driving position. The best position I could find, put me very low down in the cabin, making it difficult to judge where the nose was and virtually impossible to see out the back. The steering wheel felt like it was too high and at a funny angle too.

The feel of it.

By far the worst thing about this car is the way it feels. The steering wheel, door handles, indicator and wiper stalks, buttons on the dash and pretty much everything you can touch, has a really cheap and flimsy feel to it. Like I said, our vehicle has seen some hard graft and to date nothing has broken inside, BUT it still feels like it’s about to! The indicator stalk deserves special mention, since it’s an item you will be using a lot. Push it up or down and it clicks into position with the subtlety of taking a hammer-blow to the face. The lever itself feels almost ‘flexible’ and wobbly, like it’s hinge has loads of play in it. And it looks like it was pinched straight out of an early 90’s cadet!

The engine is a little 1.4 16-valve mill that pumps out enough power and torque to shove the little bakkie around quite nicely. The power delivery is very unsophisticated though – the engine sounds and feels quite rough. It idles with with a sort of hin-hin-hin-hin, and pulls with the kind of grunting noises my boerboel makes when you tickle his tummy. At wide open throttle the torque curve honestly feels like a pimple ridden teenager’s face.

There’s a bump of power, then a dead spot, then another spurt of oomph, then nothing… all of this within the space of a 500rpm range.

The suspension rides quite nicely and manages to soak up the bumps and make things quite comfortable. It also seems to keep things under control in the corners, but it is completely let down by the steering feel – mostly because there isn’t any. In fact the only thing you can feel through the wheel is the drivetrain tugging at the front wheels, other than that it is completely impossible to feel what the front wheels are doing through the most important control surface in the car.

Similarly the pedals lack any kind of feel or feedback. The clutch is as soft as an expensive Woolworths bathroom sponge and gives no indication or feedback of where the biting point is. The brake pedal does absolutely nothing for the first two thirds of its travel, then without any resistance under foot, the pads start to bite and it slows down. It stops well enough, but the problem is you never have confidence in the brakes because there is just so much travel in the pedal before they do anything, and even when they do start slowing you down, you can’t feel how hard you are pressing them. It really is as if the brake pedal has no mechanical link to the brakes themselves – like brakes by wire. The only control in the vehicle that feels like it is actually doing anything mechanical, is the throttle pedal – but only because the cable kinda grinds and gets stuck – so it’s not a pleasant feeling either, but it is at least mechanical.

The Box in it.

I could write an entire post on this gearbox – it is THAT woeful. Let’s start with the lever, which has a knob on it of nondescript shape and a hard, shiny plastic cap in its center. Unlike most gear-knobs, it hasn’t been designed to fit the contour of your hand, or even feel nice in your hand. It feels awkward and lumpy. Not helped at all by the fact that the reverse lock-out lever on the front seems to have a track running down the entire length of the front of the lever.

It has fairly well chosen ratios that match the engine quite well. It allows for reasonable acceleration and equally reasonable RPM’s when cruising on the highway. I have to question if first is maybe a little long for the tiny engine if the bakkie is carrying a heavy load, but I suspect this would rarely be a problem anyway.

Unfortunately using the gearbox is a nightmare. A good gear shift should feel like a bolt action rifle, slick and precise. This feels more like stirring a bucket filled with cans of baked beans, with a broken wooden spoon. The 1-2 plane feels like it is in the center of the car, and the 3-4 plane feels like it’s almost in exactly the same position, but the 5-R plane is much further to the right, and once in fifth, the ridiculously shaped gearknob finds itself directly under your left knee. Getting into 5th, by the way, is also not as simple as pushing forward and to the right…. once in neutral, you have to push the lever all the way to the right, wiggle it down just a millimeter and only then will it glide forward. It’s almost as though the entire gearbox is slightly offset towards the driver’s side. But by far, the cherry on the top of this massive poo-cake is the fact that if you try to rush a gearchange even slightly from second to third, you jam straight up into the little divider between 1st and 3rd, and get stuck. Yes you do get used to the quirks of it, but at the end of the day, you shouldn’t have to – it’s just plain rubbish.

Yes you could argue that the Chev Ute is not a bad car, because it isn’t built to do mountain passes on a crisp Sunday morning or rip a whole in the local racetrack – It is reliable and does its job fairly well. It carries a load nicely and moves it from a-to-b with relative ease and efficiency. However, I don’t look for practicality alone in any vehicle. Yes practicality is important, and especially in this catagory, but if you compare the Chev to the old Bantam; the Bantam was infinitely better to drive, and no worse at being a bakkie! This leaves the Corsa/Chev no excuse for it’s poor dynamic performance and absolute failures in providing any kind of valuable feedback to its driver.

Apologies for the ‘stock images’ in this post, but our company vehicle is branded, and I don’t want to post pictures of it here.

1 thought on “Of Corsa shouldda bought a Bantam”