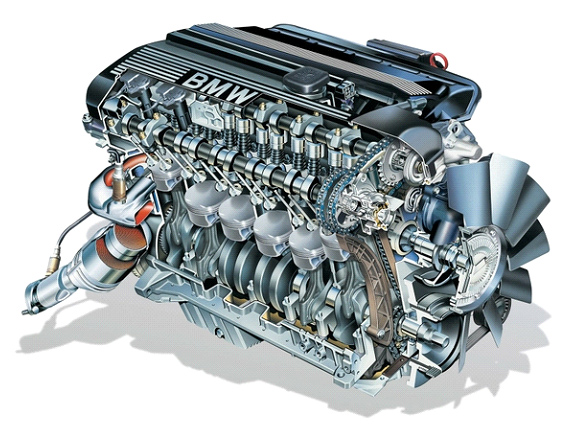 For our first post on “Let’s get Technical”, I though it would be stupid to start anywhere other than the heart of any and every car. The Internal Combustion Engine, or ICE. (Q on Cars officially does not recognize anything with an electric engine as a car… They are transport appliances)

Now it is important to remember that each engine is going to be slightly different, and new technology and innovation comes along all the time, so even though the same basic principles apply, what we discuss here might not apply 100% to every single engine out there. Speaking of variations, there are literally 100’s of variations and configurations of engines, but for our purposes we will look at the most common one.

That means for this article we will only be discussing the Four-Stroke, internal combustion, petrol, piston engine. What exactly all of that means, would hopefully become clear by the end of this.

Attached to the crankshaft are the connecting rods, or con-rods, at the end of which you will find a piston. The pistons provide an airtight seal with the cylinder walls as they move up and down the cylinder rotating the crankshaft.

On top of the engine, you will find the cylinder head (also simply called the head). The head is there to manage airflow through the engine and host various components that allow for the mixing of air and fuel, as well as the trigger mechanisms to burn the fuel. Inside the head is usually one or two cam shafts that regulate the opening and closing of valves that either allow air and fuel into the engine, or open to the other side to allow exhaust gas out. The head has an airtight seal with the engine block, thanks to the head gasket, which not only ensures this seal under high pressure, but also provides fluid channels for lubricant and coolant to circulate through the engine.

On the front of the engine is usually a number of external components driven by wide rubber belts wound around a maze of pulleys. These components include things like the alternator, water pump, air conditioning pump and power steering pumps. All of these belts are usually driven by the crankshaft pulley.

A car’s engine, is actually little more than an ‘air pump’. It takes air in on one side, and shoves it out the other. The faster or more efficiently it can move this air from one side to the other, the more power the engine can produce. The rotational motion we use to drive our cars, is actually a by-product of the air pump running. So how does it actually work?

Most cars use a normal 4-stroke cycle, which means that the engine goes through 4 different processes for each cycle of the engine. These 4 processes are called strokes, because they are timed with the movements of the piston up and down the cylinder. The 4 strokes are intake, compression, power and exhaust. They are also affectionately known as, suck, squeeze, bang, blow.

As the name would suggest, this is the stroke that creates the power for the engine to turn the crank shaft. With both valves still closed and the air-fuel mixture highly compressed, the spark plug produces a powerful spark. This ignites the air-fuel mixture and it explodes inside the cylinder. The force of the expanding gasses in the explosion, forces the piston back down the cylinder. Since the piston is connected to the crankshaft, via the con-rod, this forces the crank to turn, which is how the engine produces its power. The stroke ends as the piston reaches the bottom of its stroke, with both valves still closed.

So in the examples and explanation above, we have mainly focused on a single cylinder. Most cars have engines with multiple cylinders, in a number of different configurations.

The most popular is an in-line Four, or simply put, four cylinders in a straight line. In-line configurations often come in 3, 4, and 6 cylinder formats, but 5 and 8 cylinder configurations also exist, with the former becoming quite popular in some cars like Volvo and the previous generation of Ford Focus ST.

V configurations are sometimes used to add more cylinders to an engine, without making it longer. For example an in-line 8 cylinder engine would be extremely long and difficult to fit into a car, but a V8 engine also has 8 cylinders and is far shorter. This is achieved by arranging the cylinders into 2 banks in a V-shaped formation, next to each other. The downside of this engine layout is that it requires 2 cylinder heads, one for each bank.

Much Much More Technical:

We will post more articles at a later stage explaining even more engine configurations, rotary engines, 2-stroke engines, turbo-chargers, superchargers, fuel injection vs carburetors, and much much more!

So comment with what you would like to know more about, we’ll do the hard work so you don’t have to – and soon you too could talk about engines with authority!