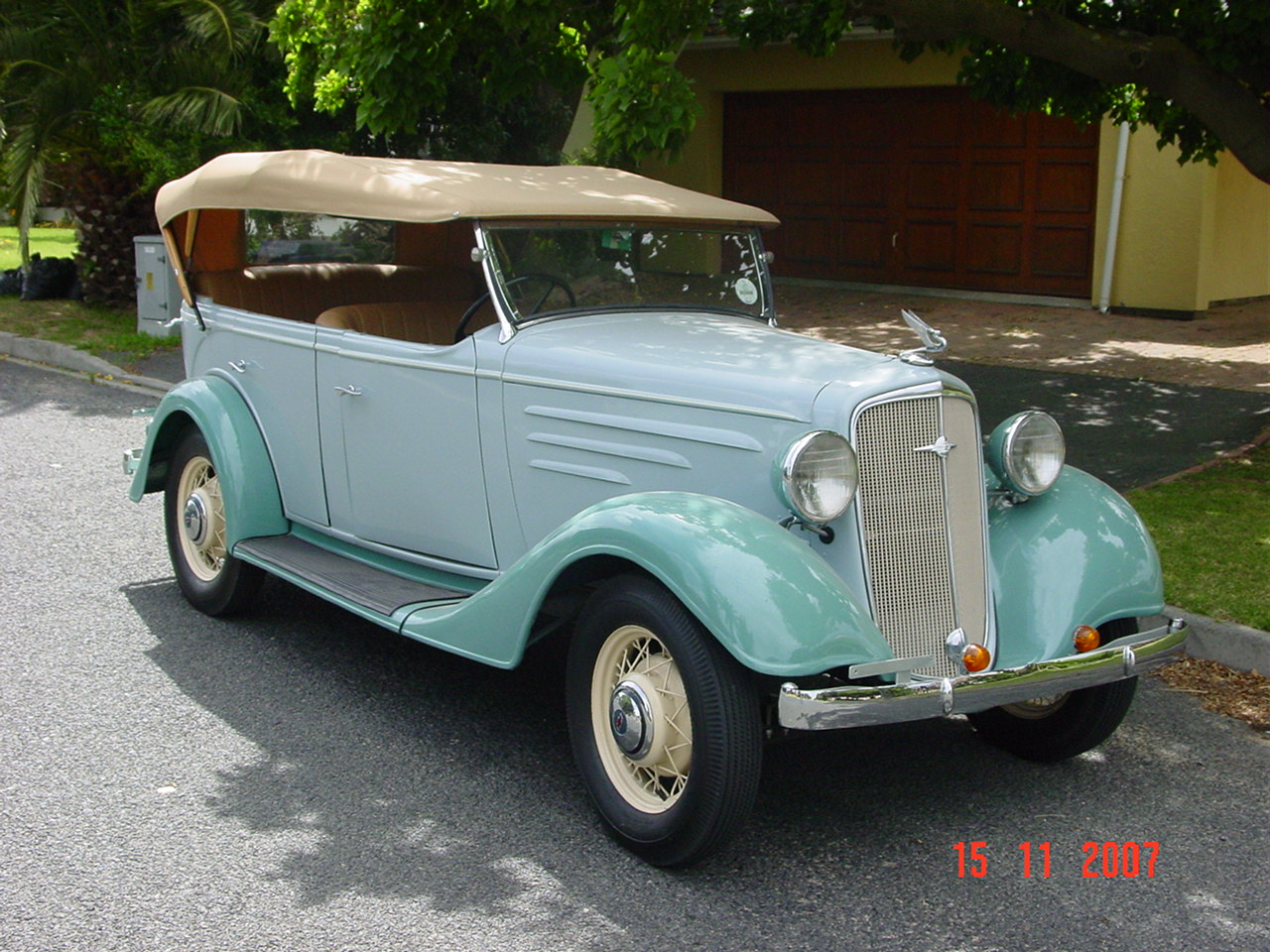 Normally I like to do most of the writing myself, what can I say, I prefer my opinions to other people’s! (joking) Today however, I am translating an article written by close family friend Christo Thomson. Oom Christo, as I know him, is one of those men with a front yard that somewhat resembles a busy parking lot. Cars, bikes, caravans and trailers are parked pretty much everywhere you can find a space… or more accurately, anywhere his very understanding wife would allow! Almost all the cars and bikes are, or were at one stage, projects, that Oom Christo has fixed up and built, into a collection of really awesome vehicles. His crowning achievement must be his beautiful 1957 Chevy, which he restored pretty much from a wreck, to a stunning example of the breed.

Moving in the classic car circles means that at times, he gets to drive some pretty special cars, and in 2007 he was allowed to take a 1934 Chev Phaeton Standard for a spin – and he wrote the following about it…

Over to Oom Christo:

2007 is the year of the Chevy. The company has been in existence for a full century! And in my (very subjective) opinion, their crowning achievement must be their 1957 model, which is now 50 years old (and the writer happens to have one in the garage).

With all the current fanfare around Chevrolet, I thought it only fitting to write a ‘road-test’ of a slightly different flavour. Most of us have become quite familiar with modernity in our cars; Aircons, ABS, EBD, Power Steering, Keyless start, Blutooth connectivity and all kinds of toys that manufacturers these days try to convince you are absolutely necessary, and that you, the consumer, couldn’t possibly survive without them.

But did you know that Keyless entry is actually as old as the motorcar itself? The simple reason being that cars those days didn’t have locking doors, or sometimes even door of any description, so they couldn’t be locked in the first place. Not to mention that getting something like a model T Ford started was such a process that no-one would have been able to steal one, unless they already owned one anyways!

Today I am testing one such ‘old car’, for all those who have never driven anything of this nature, and for those of you who have, but your memories might have been replaced by that of modern machinery by now. Today I am testing the 1934 Chevrolet Phaeton Standard, borrowed in good faith from my friend, Lategan.

You might be thinking; steering wheel, gears, brakes and 4 wheels, just like any other car – so what makes this old Jalopy any different from my modern hatchback? Why couldn’t I just get in and drive one? Well let me explain….

This is a huge car…. Seriously! It will completely fill your average garage space. But step inside. The little doors are so narrow! But wait, let me first say something about the bodywork. The “Phaeton” model designation denoted a 4-door car with a drop-top. There are no side windows. Where you would expect the windows to be, you would only find canvas flaps that could be fastened into place to close the gap between the canvas roof and the door’s upper edges. However, believe you me that the South-Easter blows through those canvas flaps as if they weren’t there at all!

Now back to the narrow door. I have to half step onto the side-steps before I can start to contort all 2m of my body through the tiny porthole and onto the seat…. Backside first, then the legs can follow…. and then you sit. The owner of this car is also a ‘generously proportioned’ soul, and you can tell by the way that the gear lever has been ‘customised’, in that it has been bent over to the passenger side… not that there is a massive amount of space for the latter anyway! Luckily my better half is much more ‘slight of frame’ and fits in next to me quite comfortably, once we managed to get in that is! (and the tight fit is actually quite cosy in the right company!)

In the back there is enough space for a couple of big guys; The result of there being no boot! There is legroom and headroom and whatever-other-kind-of-room you would like in abundance, except of course for the nonsensically small little doors!

The instrument cluster is quite simple. It’s mounted in the center of the dash, with a speedometer, Amp meter, oil pressure gauge, lightswitch, ignition, Choke and a start button. There’s no temperature gauge or even a fuel guage. You can tell when the car is overheating by the amount of steam coming out of the radiator cap, and you drive around with a jerrycan full of petrol, because when it stops moving, it’s probably out of fuel. Then you simply top it up out of your jerrycan and carry on, thus no gauge is necessary!

Under the hood (which opens upwards on both sides) there’s a big in-line six cylinder producing around 50 kilowatts, or around 70 horsepower in old English. It takes a special touch to open the bonnet without damaging the paintwork! The gearbox is a 3-speed manual, with synchronisation only on 2nd and 3rd gears. What this means is that the car has to stand dead still in order to engage 1st gear, to avoid grinding the gears terribly! Only the old guys who know what it means to ‘double clutch’, and know how to do it effectively would be able to get it into 1st without causing mechanical damage. Changing gear genuinely requires skill anyways though! For the well-being of the gearbox, all down changes are done with double-clutching anyways to make the drive smoother.

Speaking of the clutch – unlike any modern manual car, the clutch has no release bearing. In its place there is simply a small friction plate which makes contact with the clutch’s pressure plate to facilitate disengagement of the clutch. What this means is that you can’t simply keep your foot pressed down on the clutch when you come to a standstill, or the friction plate would quickly be burnt to a crisp. The solution is simply to shift into neutral whenever stationary and only engaging gears at the last minute before pulling away. Perhaps this is where the dreaded, antiquated methods of the K53 manual come from!

With live axles front and rear, leaf springs (that have been tempered during the restoration) and friction shock absorbers, and a set of tyres that feel like they might have been sourced from YSKOR, it is quite a fidgety ride. If you drive one of those Japanese 4×4’s and you’re thinking that you know what bumpy means, forget it! This old Chevy gives new meaning to the words bumpy ride! But take it out onto the highway and things settle a bit, thanks in part to the smoother road surface. Just remember to steer clear of the ‘National Speed Regulation Systems’, or potholes, because something is bound to break if you should ever hit one! Even if it is only the loss of one of the tyres, remember these old-style rubbers have to be imported from abroad at astronomical prices.

And so the time has arrived. Guys (like Mr Q) who write road tests about sportscars often speak of the nervous moments before grabbing the wheel and nailing the throttle. In this case the nerves were somewhat dulled by the ordeal of simply getting into the thing! You turn the key and pretty much nothing happens… The amp meter moved slightly, but other than that, complete silence. There is a little bit of a recipe involved in starting a car this old… First make sure you are in neutral. ‘Pump’ the loud pedal about 5 times and pull the choke out to its max. Take the start button and press it into the dash like your life depended on it. Everything is mechanical and rudimentary by today’s standards. Somewhere under the bonnet metal-to-metal contact is made and the Chev bursts into life! Now you have to be quick to keep it going. Push the start button back to its original position and grab the choke lever; slowly push it back about half way, but keep a firm hold of it and listen to that motor…. is it running smoothly or is she stuttering? You have to listen to it and decide if she’s getting enough, too much or too little fuel. You have to make those adjustments quickly and accurately or she’ll stall and you’ll have to start all over again. Get it right and that straight six will start ticking over and smooth out like a Swiss watch.

Now push the clutch pedal in and wait just a second for the gears in the gearbox to stop spinning, now you can hook first and move off ASAP so you don’t burn out the clutch. Clutch control is otherwise familiar to anyone who has ever driven a manual.

Second gear gets engaged at around 10mph and top gear at around 20. The torque from the engine is lovely. At just 20mph, at low RPM it still pulls like a train.

Comfortable speeds for the highway is around 40 to 50 mph with the wind in your hair and all manner of insects in your teeth! It’s fantastic!

However, don’t get carried away and think that you can just stop suddenly if you need to. The braking systems are completely mechanical. Everything in that department is done by levers. You essentially need the leg muscles of a rugby forward to use these brakes effectively. You therefore need to keep a very close eye on the traffic ahead of you. If the traffic starts slowing down 100m in front of you, you already need to climb onto the brakes with considerable force to make sure the Chevy is going to pull up and stop 100m down the line. Emergency and panic braking is completely out of the question! Much better to keep the speed to a minimum and make use of the engine’s braking to help slow things down where needed.

Driving a car like this is truly an experience that you won’t soon forget. It warms the heart of anyone who gets to share in it (or at least anyone else with multi-grade or unleaded pumping through their veins). Reliving the past in this way is really something incredible, believe me! Lets not forget this car is 73 years old (at time of testing)!

You can’t help but think about the pioneers of our roads who drove in cars like this every day. Today we drive on smooth tarred surfaces, with conveniently located petrol stations everywhere. A friend of my mother-in-law told me at her son’s wedding (where the Chev was being used as the bride’s car), that when they were kids, they would travel from Windhoek to Republiek for their holidays in just such a ’34 Chev Phaeton… gravel roads all the way! Pioneers I tell you! (toothpaste wasn’t even needed since there was enough dust in your mouth to keep your teeth cleaned!)

Much thanks to Oom Christo for sending the above to me for translation – I have his original Afrikaans version should anyone want a copy.

Also a HUGE thank you to Oom Christo again for letting us use his stunning 1957 Chevy on our wedding day – I’m sure photos and a story on that car will follow at some point in the future!

So what is the oldest car you’ve ever driven, and what was your experience of that compared to driving a more modern machine? Let us know in the comments, and send us pictures of your OLD bangers!