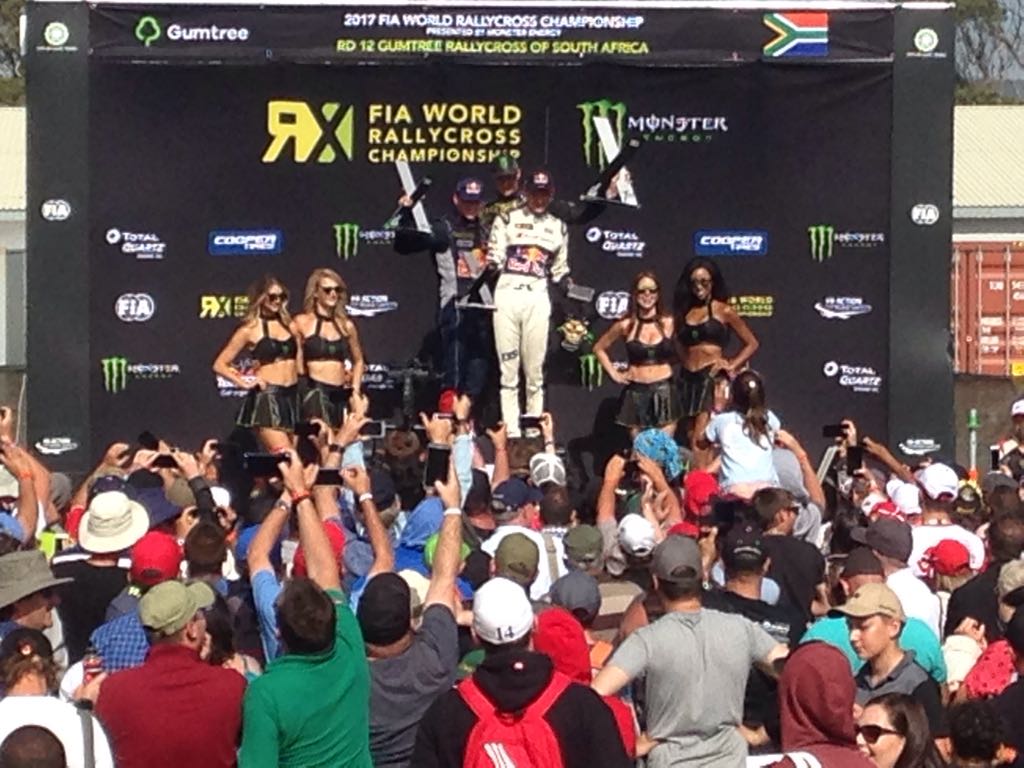 I attend as many motorsport events as I can, because I love cars, I love driving them and racing them, and I love seeing others drive them with the same passion I have, and I have a genuine appreciation for their skill behind the wheel. Put it to you this way, most car guys would claim to be pretty good drivers, and for the most part this may well be true when compared to your average Prius driver who clearly has no interest in driving. But I remember the first time I went around the track with a truly talented racing driver at the wheel and all I could think was – man this guy is on another level. Ever since that day, I have tried to study in-car footage and when available, other driver’s telemetry data to see what I can learn about their techniques. I read blogs and books written by other racing drivers on topics from racing lines to car control and gear change techniques.

So when the South African leg of the World Rallycross championship was announced, giving me the chance to see some of these legendary drivers in action – I was naturally quite interested in the prospect.

Given that tickets were on sale for months ahead of the event, and that it was widely covered on social media and local radio – with even the odd mention on TV, the day couldn’t arrive soon enough! I was dying to get there to see Loeb, Kristofferson and Block battling it out on the track! With all this mounting excitement (and likewise mounting bloodpressure), I was gutted when, despite leaving home quite early, I arrived in the area of Killarney International Raceway to be met with thousands of cars all stuck in one huge traffic jam.

After sitting in the traffic for around an hour, it finally looked like it was starting to move. I had tickets for on-site parking, and unofficial reports from people closer to the front of the queue was that the gates were very late in opening as the guys from ticketPro couldn’t get their verification scanners to work. In the end the queue started moving at a reasonable pace and I soon found myself inside the gates, with the car parked and standing in another massive queue stretching from the entrance all the way to the back of the parking area. Once again, the queue was not moving an inch and for almost 40 minutes we were stood there listening to commentary from the loudspeakers and hearing racing action starting, but couldn’t get inside to see anything – and the queue was still not moving. Again TicketPro was blamed for not being able to get their ticket scanners working – in the end when the queue did eventually start moving, our tickets simply had their tabs torn off and were never scanned at all – so why the wait in the first place?

Once inside it becomes even clearer that this event is not quite the same as the normal Saturday races I have come to see here at Killarney. The number of temporary structures that had gone up around the circuit was quite impressive! Massive VIP lounges, huge Grandstands and food and merch vendors were set up all around the track’s outskirts. Big metal rigging with cameras and equipment on them, extra speakers hanging on even more metal rigging – clearly a lot of time and effort had been invested in turning Killarney into a world-class facility.

Being the first event of its kind in this country, I wasn’t sure what to expect, so not wanting to over-invest on the first time around, I only bought general admission/standing tickets. My fiancee and myself found a space for ourselves to park on the grass mound that had been constructed in the months leading up to the event. The mound gave us a pretty clear view of 90% of the track, and, in my opinion at least, a better view than many of the grandstands would have had!

Does it live up to the Hype?

All of the racing action we witnessed on Saturday was second to nothing I have ever seen at Killarney. It is instantly obvious that there is big sponsorship money behind these cars, and the drivers do not need to ‘baby’ them around the track. Those poor little hatchbacks get thrashed to within an inch of their lives! Bollards around the track are used as ‘targets’ to indicate the fastest line rather than barriers to stop cutting corners. No apex curb is left unmounted and every inch of performance is squeezed out of those machines… because the drivers don’t have to worry about

repair bills, they are only concerned with the competition – the way racing is supposed to be!

The higher performance ‘supercars’ as they are referred to, have so much power and torque, traction becomes an illusion! They are almost constantly in a state of wheel-spin and slide! The massive power in those small hatchbacks means that their perceived speed around the track is truly impressive. The violence of their acceleration is visually evident – and in my experience a car really has to shift very quickly for it to be that obviously perceivable. In some ways the less powerful classes are even more exciting to watch, because the drivers know they don’t have as much power to accelerate once they come out of the corner, so they attempt to carry more speed through the corners – sometimes with spectacular results. – more often than not going around corners on 2 wheels!

Rallycross’s unique race format adds to the excitement – short, 4-lap races, with each driver required to do 1 ‘joker lap’. The joker lap is a split in the race track following a slightly longer, alternate route around the track, resulting in lap-times approximately one and a half to two seconds longer than the normal lap. Penalties for jumped starts etc get dished out in the form of additional joker laps being required for that driver. Each driver has a ‘spotter’ who has constant radio communications with them. The spotter’s job is to tell the driver where the other cars are on track and help him decide when to take his joker.

The combination of high-powered cars, varying track surfaces and jumps already makes for a fantastic spectator sport. Add to that the unpredictability brought by the joker laps and the fact that the races are so short, it forces the drivers to make moves very quickly and fight to get to the front. There is no ‘lull’ in the excitement and the ‘track parade’ that we see so often in F1 these days is completely unheard of. This really is motorsport that has been specifically designed to be exciting to the spectators – and it works!

By the end of the day, we were literally standing and watching the racing, not because we couldn’t see, but simply because the excitement was far too much to handle from a seated possition. Even Nicole, my Fiancee, who is not normally this interested in racing, was cheering with her fist in the air! It really is a spectacle to behold; the dust in the air, the tyre smoke, the noise, the cars going around corners on 2 wheels, cars flying through the air, sometimes parts of cars flying through the air – it really does live up to the hype, and the drama in no way detracts from the real motorsport of it, so purists will love it too.

Unlike Formula 1 where cars are now being fitted with ‘sparking’ plates on their bellies to spark showers as they scrap the track surface and where the aerodynamics and drivetrains are artificially manipulated in order to create overtaking opportunities, this still feels real. The opportunities are grasped by the drivers pushing their machines to the ragged edge to gain an advantage and overtaking is a question of testicular fortitude rather than an artificially created advantage given to the following car. The length of the races means that drivers have to take every gap they see to get ahead, because you might not get another chance in only 4 laps… and if a gap doesn’t appear, you MAKE ONE! Rallycross has made motorsports fun again!

… but maybe we’re too old for this…

At the end of the day, our bodies were as shattered as some of the cars who’s bumpers and headlights littered the infield. Tyre carcasses from front left wheels that seemed to suffer particularly on this track were also dotted around the outside of the track – the bollards on the final chicane didn’t survive the first practice session and the smell of racing fuel was hanging thick in the air, but with adrenaline still pumping, we made our way out of the complex. Thankfully with traffic flowing much more smoothly, we got home in no time. It was roughly at this point that both myself and Nicole started suffering the effects of spending too much time in the African sun. Nicole had full blown heatstroke, to such an extent that we couldn’t make it to the finals on Sunday, which really was a shame, because we are definitely huge fans of rallycross now! We may just be getting too old for roughing it out in the sun all day, BUT we will be back!

It is also worth noting that I am massively proud of the guys at Killarney for pulling off a very professional, world class event. Yes there were a few minor glitches, which are to be expected for the first time hosting an event of this magnitude, but overall I was hugely impressed. The ‘gees’ of the crowd was electric, helped much by the highly entertaining commentators who managed to maintain a ‘party atmosphere’ throughout the day. Their job was made that much easier by the sound system set up for this event. Unlike most sporting events I’ve been to, we could clearly hear what was being said at all times.

Hosting an event of this size, and btw, this event will be back again for the next 4 years, could very well have saved motorsport in the Western Cape, if not South Africa.

The ONLY disappointment about our Rallycross experience was the fact that we completely missed Sunday’s racing. I really do mean we completely missed it, because, as it turns out, there was NO live coverage of the event on ANY of Supersport’s channels. I was truly disgusted to find that no broadcaster in South Africa was broadcasting the event – I understand that the rights to an event like this are probably very expensive, and perhaps too expensive, which is maybe something the FIA should consider when visiting hosting countries like ours. What made this worse was the fact that the live stream from the FIA WRX website was not working either. It’s entirely possible that this was also a regional issue where there was no permission granted for this stream to be available in South Africa, but as yet I don’t have any answers as to why the stream was not working.

Either way, we really enjoyed the event tremendously, despite the disappointment of not being able to make it on the Sunday, but as I mentioned before – We will be back next year!